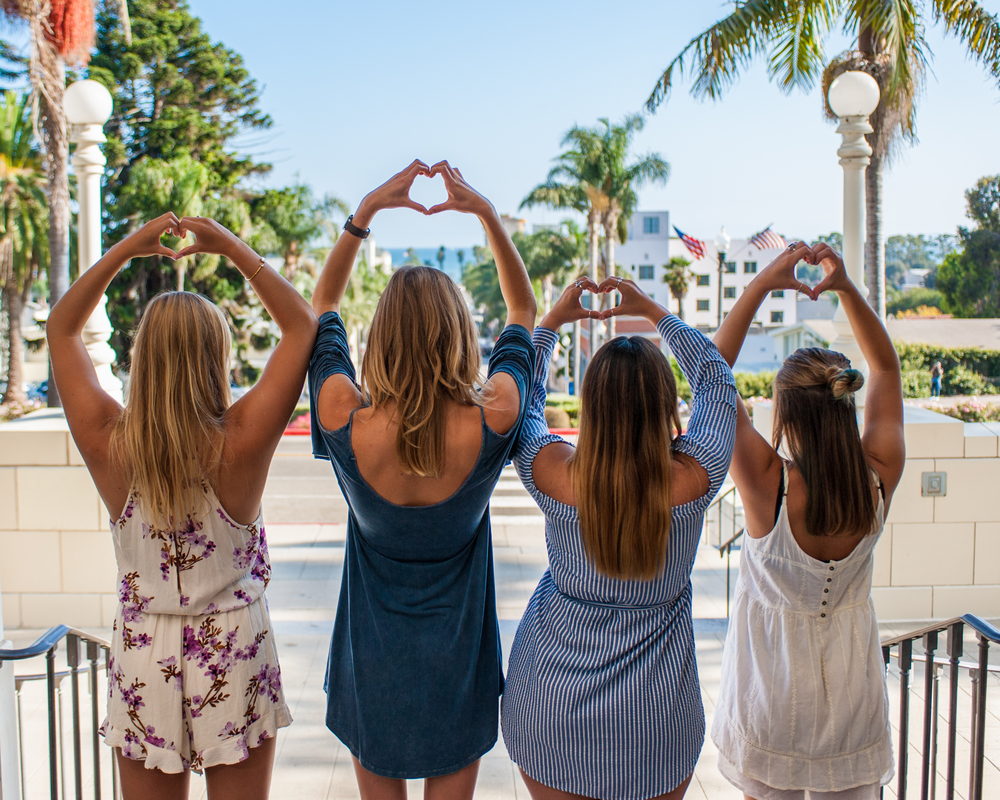 Labor Day weekend has come and gone (RIP, my liver), and that means school is back in session. Tis the season for leggings disguised as pants, waiting to buy your books until halfway through the semester, and sorority rush aka the most soul-sucking, Spanx-up-your-ass, I-will-cunt-punt-a-bitch-if-I-hear-that-song-one-more-time kind of season.

Whether you’re gearing up to rush for the first time or gearing up to judge the shit out of new freshmen’s last season Kate Spade welcome an entire new class to the chapter, you’re probably well aware of the popularity contest and social hierarchy that is every sorority on campus. And if you’re not, do you even go here? I mean, think about it—everything about rush is purely physical. You only get one fake five-minute convo about your college major, a quick tour, and maybe some Minute Maid lemonade, so really, your decision comes down to square footage of the house and which girl probably has the hottest brother. But when all is said and done, you chose a sorority that was totally “you” and that will determine your social status for however long you shall live. So listen up, because whether you know it or you don’t, your sorority speaks much more about you than three random letters stitched into ugly fabric on basically everything you own, and I’m about to tell you how, so get cozy. Also you should know that in my greek prime, I thrived off of being Campus Gossip royalty, so your generous discussion of blatant hatred in the comments only makes me smarter/better/faster/stronger. Deep down, y’all know this shit’s about to hit close to home, so bye.

Me not pretending to care:

When I think of GPhis, I think about the horror that is probably sitting through “It’s a Small World” on mushrooms, except with much more pressed pastel linen and much less diversity. Gamma Phis are like your stereotypical half-a-virgin movie sorority, and also the reason I had to schedule an immediate therapy session after rush, mostly because when I accidentally clapped, they looked at me like I just fucking retweeted Trump. Why? Because they motherfucking snap their fingers. They’re like that girl in class who reminds the teacher that you had homework due three minutes before class is dismissed. Idk. Look, I’m not saying anything bad about them, but all they really care about is school, and their mom, and their friends. Oh, and did I mention they snap?

Nobody puts triple the “D” in TriDelt like this group of closet hoes. These girls are the secret freaks of the greek system who mask their hoeish-ness by taking on weird “hobbies” they’re into, like Burning Man and on Netflix. You never know what you’re gonna get with TriDelts, considering every chapter ranges between everything from Green Peace Vegans to homey-hopping frat row. Regardless, a TriDelt’s open-leg policy scores them unlimited access to date parties, formals and HPV, so like, live it up.

There are the type of girls who say they like your vintage skirt from the ‘80s and actually mean it, and then there are Thetas. Generally all-around, they’re smart, cleaned up and classy af. Everything matches from their caramel highlights to their $60 pedicures. But their façade doesn’t come easy. Deep down, everyone knows it’s better to be in The Plastics Theta hating life than to not be in it at all. Beyond the white canvas tote bags and the lavish recruitment center pieces, Ashley just got her ass handed to her in the passive-aggressive email about why her vest was disgusting and goes against all dress code violations. But you know what they say, “A girl should be three things… Classy, Fabulous & Theta.” —Probably Marilyn Monroe

Kappas are the all-around American girls next door who will eventually go on to marry a sweet, loaded Jewish man and live in her own fairy tale with three half-Jewish children. I only say that because Charlotte from was a Kappa and you can’t make this shit up. Kappas are one of the OG sororities that have been around for like centuries, so consider them the older, classier group of the bunch. But whatever you do, don’t mistake them for lame. Kappas are like the Jennifer Lawrences of the greek system, and I don’t see Jennifer Lawrence going sober to any bougie event. Get you a girl who thrives off Sunday brunch, but can also spend an entire weekend binge-watching a marathon on ABC Family. Get you a Kappa.

I’m not here to judge, but that’s mostly because TotalFratMove.com already did it for me. There’s a reason these girls are called AD-proof, and that’s because they can outdrink anyone in the entire greek system. You’ll always see the same group of them at a Sig Ep rager, but the good thing is, they’ll unknowingly always be your ally when you’re waiting for your own sisters to arrive, because 1) they’re never not obliterated and 2) they’ll never not offer you a handle pull. ADPis are the drunk girls in the bathroom sporting last night’s eye makeup who will always compliment your new boobs or eyebrows, so really I have no problem here. Four for you ADPis, you go ADPis.

AChiOs may look intimidating from the outside, but that’s only because they are. They had like, 12 founding sisters who you know just sat around watching Bravo while talking shit on every sorority, and prob their own, but their philanthropy serves women of domestic violence, so you know they can fuck some shit up. Like I literally called out sick during Greek Week because of the sheer murderous volume of that fucking AAAAA-CHIIIIII-OOOOOO chant that still haunts me when I sleep. But being competitive also means getting what you want, so if it were me, don’t even bother asking Dillon from ATO to formal if an AChiO might have dibs. She’ll go full Rihanna on your ass faster than you can say Michael Kors.

Remember that girl in college who claimed she wanted to really make a difference in the world and you were all like, “That’s awesome! How?” and she tells you she’s thinking of taking on the event planning industry? Gee wow, Tiffany for Prez 2020. Alpha Phis know how to have a good time, but they also know how to get away with doing the bare minimum—same. Their list of college Comm courses consist of Tourism 101, Brunching For Mass Basics, and Popular Culture. And yeah, that’s textbook lingo for “pop culture,” and it also may or may not have been a class I barely passed took. Once graduated, she’ll be plastering her “glamorous” LA lifestyle all over Instagram while working in public relations, aka the front desk morning bagel-getter.

On the west coast, ZTAs are all the girls who decided to rush for the sole purpose of boosting their resumes and taking a leadership role rather than being sexually active in the greek system, but on the east coast, Zetas are so much more than that. If you’ve seen Taylor Swift’s “Bad Blood” music video, or just anything she’s ever been in, just think of Zetas as a group of powerful, always-involved, mostly white girls, who will deny that to their grave, exactly kinda like Taylor Swift. Zetas are overly committed to fundraising and their philanthropy, but probably to distract people from their true identity—that being the Regina Georges in sheep’s clothing. Also like Taylor Swift.

When it comes to DGs, dumb shit like GPA, extracurricular activities and part-time work experience are at the bottom food chain. These are the girls who scored white M3 series for their 16th birthdays and paid for overpriced gifts for their littles with daddy’s tuition money. They spend a stupid amount of time, and dollars, on Dry Bar blowouts and Kendra Scott statement necklaces, while their claim to fame is knowing all the words to Nicki Minaj’s verse in “Monster.” Oh, and it’s no coincidence “Dirty Girls” worship their sacred anchors because, like, nothing goes down faster than an anchor. You didn’t hear it from me.